“What if our languages are different, we all have the common Mahabharata. What unites us as Indians and make us proud inheritors of a rich culture is Rama, the destructor of evil, who later came as Krishna, to protect Dharma,”--says the Pandavani Gayika.

National and International renowned Recipient of Padmashree, Padma Bhaushan, Twice D.Litt (Next month 3rd D.Litt) Sangeet Natak Academy Award and employee of Bhilai Steel Plant. One who can recite the whole Mahabharata in the form of Pandavani Lok Gatha.

Illiterate, Thumb impressor who has mastered to write her name with difficulty, loves to eat Paan (betal leaves)  and never gets exhorted of discussing about the folk art. Yes, or else she gets restless with normal conversation. She can hardly remember the names of the places and people but can put in the whole Mahabharata epic in her rich cultured shrill voice.

Who else can be this? 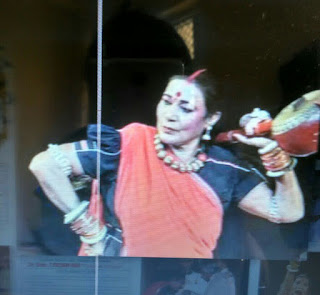 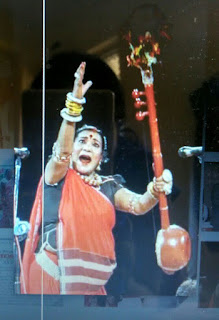 She grew up like a tom boy playing "gilli danda", "gotali", "gola barudh " , "Kabbadi" kind with boys. She uses to out win boys and always challenge them in games. Her early childhood was full of boyish pranks till one fine day, at night she heard the maternal grandfather singing Padndavani katha. She was drawn and for some time she forgot about everything and was immensely got engrossed in the "Draupadi Cheer Haran recitation" by her grandfather like a thunder bolt lighting strucking to her. When her grandfather asked her willingness to learn Pandavani Katha-she nodded in affirmative and started her regular class in learning this art form. This was not known to her parents. She then slowly started assisting her mother in household chores and then squeaked out at night to learn Pandavani Katha.

Pandavani Katha is similar to Harikatha-purely in folk style and folk form.  It is the folk oral narration  of Mahabharata with Bhima as the Hero. When Teejan Bai started at the age of 13, she gave the performance without music accompanied. Later she incorporated musical instruments joining her rendition.

This art form predominantly sung by males-It was Teejan who did break the convention and stated "God chooses everyone for one or the other purpose. He choose me to Pandavani Katha". She had to withstand the unwillingness of her parents of her learning She was locked in a room for three days without food and water. She was thrown out of home, beaten by her mother,  her marriage was catastrophic, yet still she did not give up and continued to recite the katha. Teejan bai struggled between personal and professional front and has indeed withstood the test of time. She was not accepted by her village, not just a gender discrimination but also caste discrimination as she comes from lower caste.

Teejan brings all the characters of Mahabharata like Krishna, Arjuna, Bheema, Dushasana as she narrates with her thundering shrill voice and her tambura. Audience get stuck and zipped to the narration and her throat rip-apart as she begins to narrate war sequence. The Tambura and the strings represent goddess Saraswati, with the peacock feathers at its tail it representing Krishna, and it surprisingly transforms into Bheema’s menacing mace. “When I play Arjuna, it becomes a bow, and at times it even becomes a sword"-says Teejan Bai.

Her first performance came at the age of 13. From then it was no looking back. Teejan Bai, now an employee of the Bhilai Steel Plant is hardly seen in Bhilai. Most of the time she is touring throughout the world for giving performances. She has also trained some of the students irrespective of gender. Ritu Verma being one of her successors who has taken up this art form and gives spellbound performance and few others are also trained in this art form.

She designed her own costume look for this art form. As she is very fond of Red colour Chhattisgarh traditional saree with black colour puffed sleeve blouse. With all the other Silver ornaments decorative worn by her grandmother and dehati women that would weigh more than eight Kg-she choose as standard attire for her performance. 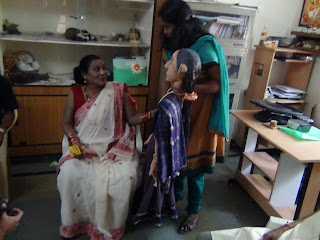 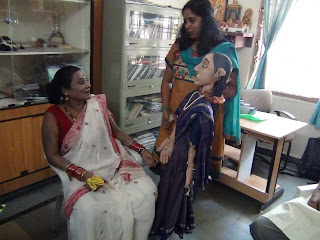 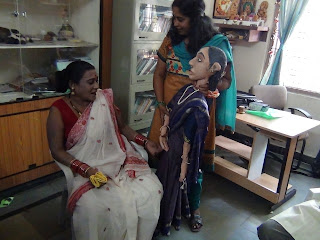 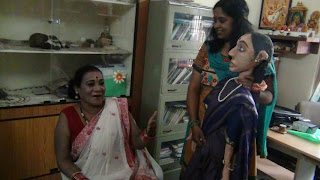 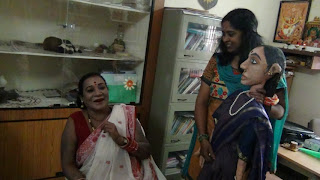 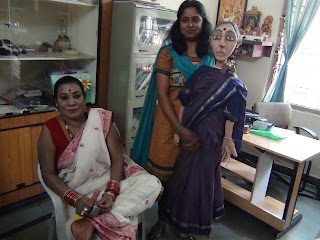 It was a memorable time for me during her recent visit to Sphoorthi Theatre. Along with local folklorist, Experts in Folk arts, media, friends we arranged for a small felicitation ceremony at Sphoorthi Theatre office. I can still feel the time, conversation and the ambiance that I had with her. I considered myself as one of the fortunate's to whose place Teejan Bai visited and spent time. Typical White Saree with embroidery work done in Red as border. Both hands full of adorable red and white combination glass bangles, bright red vermillion, sindoor, koyled eyes, lips painted in red, Jumkhas for ears--Oh!  she looked simply adorable. She then removed her 4" thick silver anklets in traditional design as her saree border was getting stuck very often. I just stood staring at her anklets.

One similarity between both of us is that I am also found of thick anklets. Though I wear a 1" thick anklet, one thinner anklet and a  kada. Of course both of us artists-She is Pandavani gayika and I am a puppeteer!!


The moment I recollect the memorable moment with Teejan Bai-a kind of horripilation erupts all over!!!!

May the Almighty bestow good health to her!!! 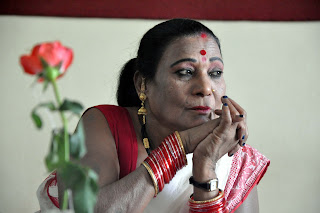 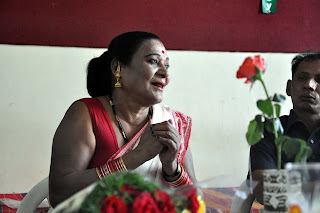 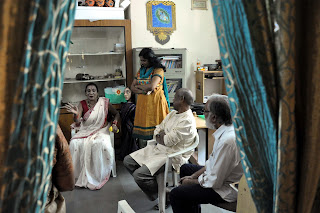 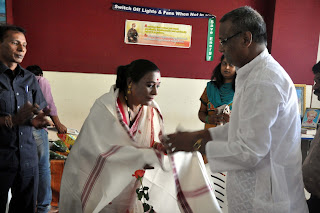 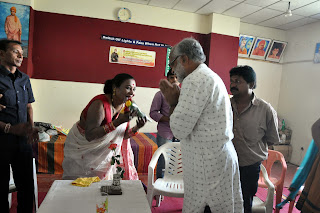 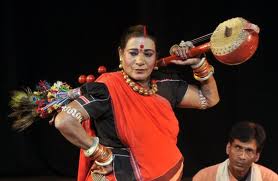 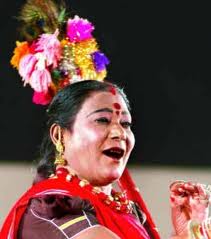 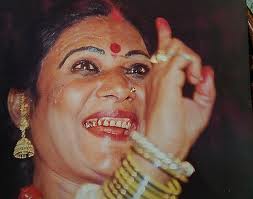 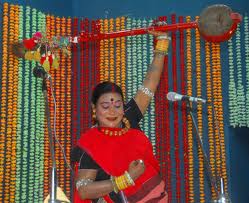 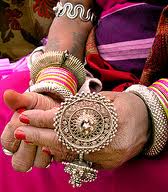 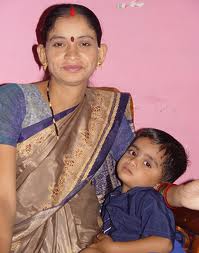 Jayadhir said…
It is so bad on Bhilai Steel Plant authority that Teejan Bai was enrolled as a Class IV employee. Now she is an officer on Promotion.
This is the reward for Folk artists given India. --Strange!!!

The same thing does not happen with sports personalities. They are given High posts and position. Why this disparity and discrimination???
13 October 2012 at 07:56

Popular posts from this blog

Tamasha is a traditional Marathi folk art form. It includes both singing and dancing forms. It is widely performed theatre groups within the state of Maharashtra, India. It is in fact a mobile theatre that goes to different regions of Maharashtra. The word ‘Tamasha’ is Persian origin meaning ‘to have fun or to play’. Today, this word is commonly used in Hindi, Marathi, Kannada and Urdu. Again, some have researched the origin of the word Tamasha to Turkish langaugeand has entered into urdu and finally borrowed from Urdu to Marathi. In Marathi the word Tamasha means 'A mixtures of specialized performances like dance, music, different enactements or roles by women or girls, participation of women, and singing lavanis'. I wonder how Persian or Turkish languages have influence Marathi. This folk art from is so very deep rooted in rural Maharashtra for more than eight-nine centuries that it is quite difficult to say when this Tamasha was first staged. This art form is cal
Read more 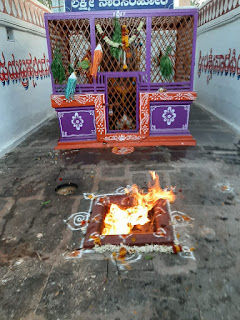 Hunnime meaning Full Moonday. Every full moonday , new moonday, Ekadasi are named as per Hindu almanac. Each of them have a great sifnificance that is related to mankind. Kara Hunnime (fullmoon day of Jyestha, a festival for peasants) was on June 17, 2019. This is full moonday is celebarted in some parts of the Karnataka State, India. This is the first full moonday after the on set of mansoon rains in this region. Hence, this full moonday is celebrated with sepcial reference to cattles. Farmers celebrate this kaara Hunnime   as a sign of   end of summer   season and welcoming mansoon.  In the morning, women folk collectively pray to the Pipal tree by tying sacred threads all around.  Also offer the sweet delicacies prepared as part of the worship. Farmers, wash bullocks and paint their horns with different colours, tie colourful pompoms, forehead knots, hip belts, foot jingles. In short they decorate bullocks cattle’s with ornaments and colourful ribbons. The
Read more 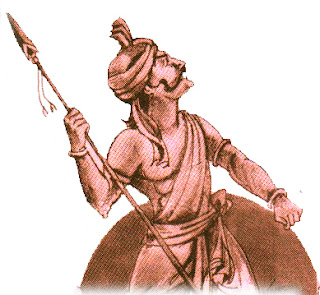